Posted on 10th November 2014 by lookwestlondon 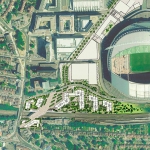 Quintain have launched a consultation on the latest phase of Wembley Park’s regeneration – the “South West Lands”.

The developer says the plans could deliver up to 850 new homes, hotel, office and retail space and significantly improve the connection between Wembley High Road and the regenerated areas to the north.

The plans also include a series of communal gardens, opening up views to and from the south and White Horse Bridge, new shops and affordable office workspace around Station Square.

The plans, designed by John Thompson & Partners, are expected to be subbmitted to Brent Council by the end of 2014.

The regeneration of Wembley Park has already delivered the London Designer Outlet (LDO), which has just celebrating its 1st birthday and attracted 5
million additional people to the area in its first year of trading; the Hilton London Wembley hotel; a new public square outside Wembley Arena and the refurbishment of the Grade II Listed Arena; a nine-screen cinema; 525 new homes, including 286 affordable apartments; and 660 new student accommodation rooms.